Fulham signing Jean Michael Seri during the summer transfer was a real coup.

The midfielder had been one of the best players in Ligue 1 over a prolonged period and the year before he came very close to signing for Barcelona. The failed move to the Camp Nou wasn’t simply a rumour, those involved in the negotiations spoke publicly about it.

Moving to the Cottagers wasn’t what the player wanted, with those close to him dismissing the idea even a couple of days before it actually happened. Not only that, he went for much less than the €40m which had been his set price tag for some time.

Now Seri’s lawyers are releasing a legal statement which details action against former club Nice. It’s alleged the French side sold the midfielder below his market value, and received the rest by some other means, so Seri wouldn’t receive as big a kickback as what he’d been due.

It’s claimed that initially Fulham only wanted Seri, but then Nice pushed Maxime Le Marchand their way for a €2.9m loan fee and €13.5m for a full transfer.

According to figures published by French newspaper L’Equipe today, Fulham would have paid €11.2m for Seri and €16.4m for Le Marchand, which would be absurd given the differing levels of the players in France.

Nice have recently sent Seri his cut of the deal, and his lawyers say it shows Fulham paid less than €12m.

Julien Fournier, director general of Nice, is quoted as saying: “You have to know that he had no offer last summer. Then Fulham was first interested in Le Marchand, starting in January. Then they looked at Le Marchand and Plea.

“It was me who blew them the name of Seri, because they were looking for a midfielder. Moreover, on the day of the signing of his contract, Seri was aware of the amount of the transfer and of the premium. In addition, when it was to be paid over four 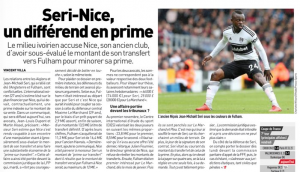 years, it was paid to him in one go, at his request. All of this is so rude… The Legal Committee felt that the request was unfounded and made a very clear decision.”

L’Equipe finish with: ‘On the side of the defence of Seri, it is expected to bring the case on Monday before the Joint Appeals Committee of the FFF, then, if necessary… apply to the state courts, both civil and criminal.’