Currently on course to having the best transfer window out of all the Premier League sides, Fulham aren’t stopping yet.

Having already signed the likes of Jean-Michael Seri, Maxime Le Marchand, André Schürrle and keeping hold of Ryan Sessegnon, the Cottagers are looking to bolster their midfield/attack a bit further, if Gazzetta dello Sport are to be believed.

Hidden away in a round up of what’s going on in Serie A outside of the big clubs is the small nugget of information that Slavisa Jokanovic’s side have recently enquired about Sampdoria’s Dennis Praet.

This likely came after the recent friendly both sides took part in in Aldershot, which the Italians won 1-0. 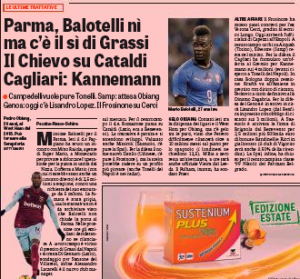 The Belgian midfielder, who can also play a bit wider, has been linked with a move to the Premier League for as long as we can remember, dating back to his days at Anderlecht, and a move to the Genoa club hasn’t changed that.

There’s nothing more to the story than the enquiry, and it could just be Fulham were kindly told to look elsewhere.

We’ll be keeping an eye open for anything new on the matter.