That’s according to A Bola and Record, who both cover the player’s future and the Premier League battle for his signature.

A Bola report that Fulham and Wolves are in competition for the midfielder, with the latter already securing a deal courtesy of their relationship with super-agent Jorge Mendes.

That will see them pay €20m plus a further €5m for individual and collective targets for the player, who is likely to be a replacement for Ruben Neves.

Those numbers are backed up by Record, who say that there is a ‘principle agreement’ between the two sides but add that Fulham now ‘enter the equation’.

In fact, they have already sent a proposal to Alvalade worth €18m, a figure that does not better the deal currently being offered by Wolves. 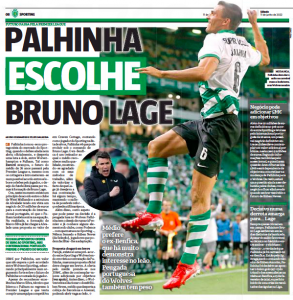 A Bola say Fulham had been following Palhinha’s performances for several months and back up the claims that their offer is lower than the one from Molineux and the €20m Sporting have set as a minimum.

They, then, have work to do to convince the Portuguese club and the player, who Record say prefers the project on offer at Wolves.

Despite ‘recognising the excellence’ of Marco Silva, he wants to work under Bruno Lage and believes he can develop under him better than he would at Craven Cottage.

The former Benfica man is someone he sees as ‘having a lot of quality’ while he also likes his working methods. There is also an appreciation of the fact that Lage has wanted to sign him for some time. 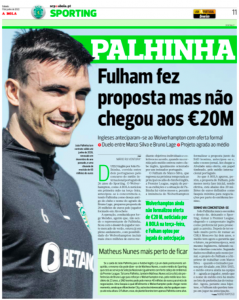 The heavy Portuguese presence at Wolves also factors heavily into the player’s thinking as he already knows players like Podence, Nelson Semedo and Ruben Neves.

For now, there is only a ‘pre-agreement’ between Wolves and Sporting, but an official proposal ‘should arrive soon’ as the Premier League side get closer to selling Ruben Neves.