We may live in a world where literally anything can happen at the minute, but it’s not often that many players go from Real Madrid to Fulham in the space of year.

With all due respect to the Cottagers, that’s a path that usually has a few stops in between rather than being a direct route. Not for Alphonse Areola though.

The Frenchman was number two to Thibaut Courtois at the Bernabeu last season but a disappointing year in the Spanish capital means the goalkeeper, who is owned by Paris Saint Germain, now finds himself at Craven Cottage instead.

It’s an interesting move, to say the least, and L’Equipe have taken a look at the player and how he ended up with Scott Parker’s promoted side.

Areola, they say, is ‘already satisfied’ because he has regained his status as a starter, something that wasn’t afforded to him at either Real Madrid or PSG.

However, performances on the pitch have not been quite as happy, with it explained he’s ‘experiencing a complicated start’ to his adventure in the Premier League.

For example, against Leeds, he conceded three goals from their first four shots while Aston Villa also scored three from three, hardly great reading for a goalkeeper.

Four more defeats, a draw, two victories and just one clean sheet do not make for good numbers for Areola, who has not been ‘capable of heroics’ so far.

It’s not all his fault, of course, with Fulham’s defence hardly great, something that’s been acknowledged by pretty much anyone whose seen them this season.

L’Equipe say it’s not even a case of his ability, with few questioning his potential and many believe he has ‘immense qualities.’ Indeed, his last appearance for France had most putting him down to replace Steve Mandanda as number two for Les Bleus. 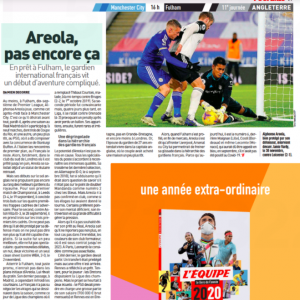 That’s something he hasn’t replicated at club level, though, with his detractors pointing out a ‘deficient mind, introversion and a great difficulty in dealing with pressure’ as negative aspects of his play.

For Areola it’s presumably all a little frustrating as moving to Fulham was not part of his ‘original plans’. He was dreaming of the top flight, but his spell in Madrid ‘chilled the courtiers’.

He was unable to ‘negotiate the turns’ that took place during his time there and so had to look down the ladder to get the game time he needed.

That’s why when Fulham came along Areola jumped at the chance, believing the opportunity to take on the likes of Liverpool, Arsenal or Manchester City would slow his slide down the French pecking order.

That has not been the case, and he now finds himself arguably sixth in the reckoning, a worse position than the one he was in previously and something he needs to turn around quickly with Euro 2020 on the horizon.