If Barcelona trying to sign Philippe Coutinho had so far been an irritant for Liverpool supporters, then it’s about to get seriously annoying.

Catalan newspaper Sport have a pretty dismissive report on Sunday which won’t be happy reading for Reds. Sport say Liverpool are set to give their ‘OK’ to selling Coutinho to Barcelona, and given everything is already agreed with the player, a transfer isn’t too far away.

But their report seems to be built on educated guesses, rather than concrete information, and the assumption that Liverpool simply have to accept an offer when it touches €100m.

Sport believe it’s clear Coutinho to Barcelona won’t become a soap opera because, even though Liverpool won’t want to lose their ‘franchise player’, when things get to €100m the club is forced to ‘rethink everything’ and the interests of shareholders take over.

The Catalan newspaper say ‘Barcelona will send a representation to the English city this week to close the operation’ and go on to add: ‘Little by little the work of representatives of the Catalan club has been undermining the leaders of Liverpool.

It should not be forgotten that the British club is run by a fund, Fenway Sports Group, led by John Henry, which is basically driven by money and profits. Already in January he was about to sell the club to a Chinese conglomerate for €900m.’

Leave aside the accuracy, or not, of that, and the arrogance is clear. Liverpool are being brushed aside as a selling club, not on Barcelona’s level, not even close.

Luis Suarez’s exit was different. The Uruguayan was forced to stay an extra year and 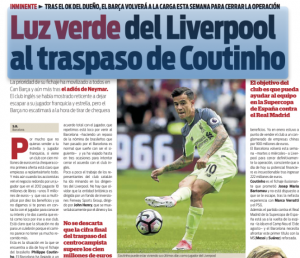 issues around the pitch, including problems caused entirely by the player himself, created a unique situation.

Selling Suarez didn’t really rock Liverpool’s status as a big club, rolling over for Barcelona this time, and allowing Coutinho to go without so much as a battle, may prove Sport’s claims correct.

Alternatively, Liverpool have a relatively clear way to playing hard on this. Quote €150m, and tell Barcelona that any further suspicion of them contacting Coutinho or his entourage with be met with a report to the relevant authorities.