A five-page story with Manchester City star Bernardo Silva can be found in today’s edition of Portuguese newspaper O Jogo, who had a long conversation with the 27-year-old.

Despite talking a lot about the national team and the Portuguese league, the player of course had a lot to say about his club, with one of the main topics being the hunt for a Champions League title.

Bernardo Silva, who has already won the Premier League three times, admitted that there’s a ‘frustration’ at not having lifted a European trophy yet.

“Obviously the Champions is one of the big goals because it’s the competition this club have never won and we need to win. It’s been a frustration for us not to get there. Last year we went to the final, but we couldn’t win it,” Bernardo Silva told O Jogo.

“I mean a sending-off, a poorly signalled penalty, a ball that doesn’t go in, hits the post and goes in or out. And such a move can decide the continuity of a team in the competition. But I say again, the base competition is the Premier League, where the strongest wins. Champions, being the most prestigious competition, we have to look to win it and we know that this club needs it.” 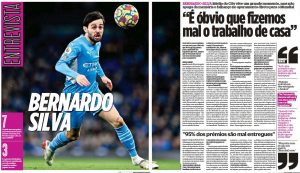 Silva was quizzed about Cristiano Ronaldo, and was asked if they’ve dined together since his arrival in Manchester.

The Manchester City midfielder explained they have a good relationship with the Portuguese players from United.

“We’ve already had dinner at Bruno’s house with all the Portuguese, the three from United and the three from City. Bruno has been here longer and I’ve been with him on more occasions. This year we haven’t gone so much because we have a very busy schedule, it’s much more complicated. Sooner or later we’ll all have dinner again.

“We send a few jokes, one side or the other side, but that’s normal. All very healthy. It’s like the national team: players from Benfica, Sporting and FC Porto are playing. There are jokes and such, but the atmosphere is healthy.”

O Jogo also teased Silva to talk about his future, pointing out that since he’s in the best league in the world, at one of the best clubs in the world, he doesn’t think about going somewhere else.

“It depends. Right now I think it’s the best championship in the world, I think it’s the country where the level is highest. There was a Spanish dominance a few years ago, which lasted a long time. I think that at the moment the English teams are the strongest in the world and therefore it is always good to be where the best football is played.

“Then there are personal decisions that also count, such as being closer to the family, etc. But I confess that one of my dreams was to be part of the best championship in the world.”