Real Madrid have been busy little bees in the summer market so far.

They’ve secured the signings of Eden Hazard and Luka Jovic, with Ferland Mendy expected to be confirmed soon… after Didier Deschamps said the France international will be a Madrid player.

Now they move to midfield, and this is where things could get interesting and messy. It makes sense for Madrid to have got the majority of their purchases out of the way before tackling the hardest issue.

Manchester United’s Paul Pogba is splashed across the front of Tuesday’s Marca, and it’s stated Madrid are going for the signing ‘with everything’.

Zinedine Zidane is said to have won the internal battle, and Pogba is the midfield target, which may leave Christian Eriksen in some limbo. 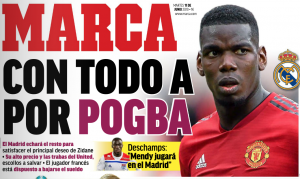 The manager doesn’t want ‘Eriksen, Van de Beek or anyone else’, so whilst Madrid know United want €150m, they’ll try to get the price down a little. Zidane expects his club to make the transfer effort.

Pogba is ‘willing to pressure’ Manchester United to let him go, which could result in some fun and games. 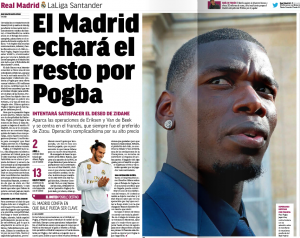 Mino Raiola is ‘in charge of the operation’, and it’s explained this is something which could even drag on into August, with Zidane making it clear Pogba is the man he wants.

Of course, Gareth Bale gets a mention. Real Madrid would very much like United to suddenly reignite their interest in the Welshman, so he can be used to bring down the cost of the Frenchman.

That said, Bale is thought to be against any move, digging in because his family is very settled in the Spanish capital.