It reads ‘They want Rakitic’ and the they here is Inter Milan, Paris Saint-Germain, Bayern Munich and Manchester United, who are the clubs reportedly interested in the midfielder.

The Croatia international has demanded an improvement in wages, something which the La Liga winners are unwilling to fulfil and even though his contract is until 2021, the arrival of Frenkie de Jong in the summer could make him consider his future at the Camp Nou.

His impressive displays for Ernesto Valverde’s side and De Jong’s signing have made several other clubs try to ‘tempt’ Rakitic.

Regarding the interest from the English outfit, it’s claimed the Red Devils are the club who ‘follow closely’ and Manchester United are going to ‘play with the money, prestige and the attraction that the Premier League always offers’. 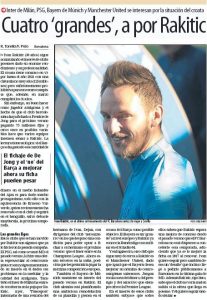 Any approach from the 20-time English champions could see them face competition from PSG, Inter and Bayern.

Rakitic will turn 31 in March and whether United would consider investing heavily in a player who is in his 30s or not is to be seen.