Earlier this month, when the Argentine press started talking about Boca Juniors’ chances of signing Edinson Cavani from Manchester United, it only looked like a distant dream.

Local reports said club president Juan Roman Riquelme had spoken to the striker to line up a transfer for 2022, when he’d be out of contract following an option to extend the current deal next summer.

However, things get a lot more serious today, as Argentina’s main sports newspaper, Olé, brings the hunt for Cavani on their front page, claiming Boca Juniors would like to have him this summer.

Back in October last year, when the 33-year-old admitted he spoke to Riquelme, he claimed there was a ‘secret’ between the two.

Olé’s report starts with that, claiming that this secret was Cavani’s promise to join Boca Juniors once he’s ready to return to South America.

There’s a good reason for Boca Juniors to believe they can take a player out of Manchester United these days, and that’s Marcos Rojo, who took the path to the Argentine side last month.

Olé now claims that the defender had a good relationship with Cavani in their few months together at the Premier League side, and the Argentine player is another one who’s working on the transfer. 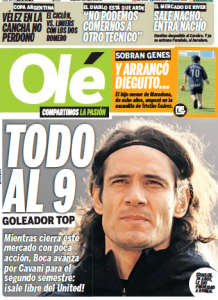 “You forget that there’s another insured signing there. Just as he told Paredes that he was waiting for him in Boca, Marcos is going to work for Cavani to come”, a friend of Rojo told Olé.

The newspaper then brings the most important arguments in this story, which is why Cavani would like to leave Manchester United in first place.

They explain that despite the option to extend his deal for one year, for which Ole Gunnar Solskjaer has already expressed his desire, that will depend on the striker’s wish to stay.

Cavani reportedly told Riquelme that depending on his adaptation to Manchester in his first year, he’d leave right away. And Olé claims things haven’t been ‘tempting’ so far, both in terms of football as in his day-to-day life in the city, which is ‘opposed’ to Paris.

“Although he’s playing, he’s very familiar, it’s very surprising. He likes to be in Salto, in the field, with the horses. And coming to Boca would give him that possibility: to continue being competitive, but five hours from his house”, a source told Olé. 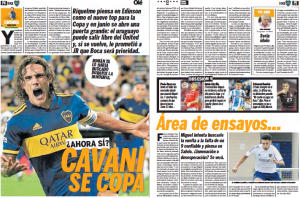 “Edi is painted for Boca. And he’d love it”, people close to the player told the newspaper, claiming the Copa Libertadores is another dream of his.

“He played three World Cups, won a Copa América, several titles in Europe, but Edison never had that Libertadores that all South Americans want in their hands.”

With Olé clearly taking Boca Juniors’ side in this story, they basically only use the arguments which favour Cavani’s transfer to the Argentine side.

The only reason pointed out for the player to stay in Europe is his kids from his first marriage, as they live in Napoli. Apart from that, the newspaper only shows the good side of a return to South America.

Cavani has indeed made public his wish to play for Boca Juniors a long time ago, but would he do that with an option in his hands to stay at Manchester United for one more year?

That we shall see. And Riquelme, according to Olé, will be waiting until June.