Sporting’s Brazilian midfielder Wendel has picked an injury and is expected to be out of action for two months.

For A Bola, and perhaps for Sporting too, that’s given a reason to dive head first into Adrien Silva rumours.

The story of the player’s potential return to Lisbon from Leicester City was already covered at the weekend, and is a favourite for the Portuguese media.

Given Bruno de Carvalho, the former president who had a prickly relationship with Adrien and pretty much everyone else, has left, the return is considered likelier.

On their front page, A Bola say that Leicester City have agreed to negotiate for the player, however, that doesn’t mean a move is happening. 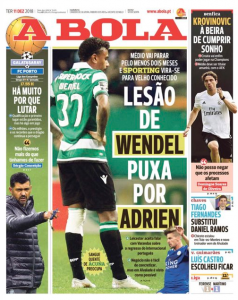 Sporting want an initial loan, and at the weekend there were suggestions the Foxes could even be asked to continue paying a percentage of the player’s wage.

The Lisbon club will want the deal far cheaper than Leicester are going to be willing to provide, so there’d need to be compromise from both clubs, and likely from Adrien himself with regards to wages.