Home Europe Front page in Catalonia as Barcelona get closer to player after months...
SHARE

Catalan newspaper Sport have Frenkie de Jong splashed across the front of their Sunday edition, and there’s some optimism on a potential transfer for the Ajax youngster.

Having been understandably stubborn with their stance over the player, Sport claim Ajax have now ‘put a price on De Jong’. There’s now reason to be ‘somewhat optimistic’ that a deal could happen, with Sport deciding signs from the Netherlands are positive.

Marc Overmars had been repeatedly blunt in the Dutch club’s not-for-sale stance, but after constant contact with the player he’s beginning to soften.

Sport take claims from the Dutch media to say that Barca representatives are expected to travel to Amsterdam with the aim of negotiating a transfer for the midfielder. 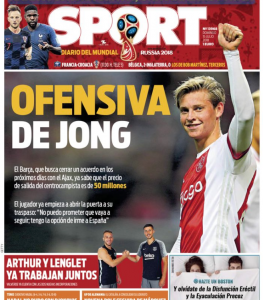 A €50m offer is suggested, and also that such a figure is the around the price-tag, with the player himself putting pressure on Ajax to try and make a transfer possible.

Negotiations opened ‘months ago’ and now Eric Abidal and Ramon Planes are attempting to get those talks to a conclusion.

The 21 year old is said to be in a hurry to wear Barca’s shirt.