After Barcelona allowed Lucas Digne to join Everton on permanent transfer in the summer, Jordi Alba is the only experienced left-back at Camp Nou.

Ernesto Valverde saw his side suffer their first league defeat of the season against Leganes and for that clash, Thomas Vermaelen was fielded on the left side of the back four and was later replaced by the Spaniard.

The front page of Friday’s edition of Mundo Deportivo has a story about the Blaugrana’s transfer plans to strengthen their defence in 2019. Their immediate focus is on finding a backup for the former Valencia man as 18-year-old Juan Miranda is Alba’s current deputy at the club.

Sergi Roberto and the ex-Arsenal defender, who can also play as left-back, have not convinced so far and therefore the 54-year-old manager is looking for an experienced left-back.

The La Liga winners are open to the idea of strengthening the position in January, provided the player meets their requirements. Valverde identified the need to sign a left-back in the summer, but Eric Abidal and his assistant, Ramon Planes, thought Miranda could be used as Alba’s back up.

Another position they want to strengthen is the heart of the defence as they want to bring in a replacement for the Belgium international next summer.

Vermaelen’s a free agent after this season and even though Valverde recommended the 32-year-old to be handed a new deal, things changed for the latter after the arrival of Abidal, who has decided to extend his deal.

The Barcelona technical secretary is looking for a central defender who has the experience of playing in the Champions League and they have time on their side to identify their targets as Vermaelen will not be allowed to leave in the mid-season transfer window. 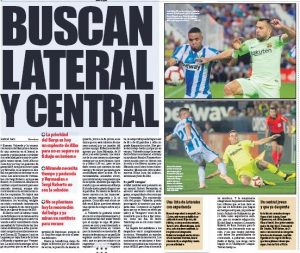 An earlier report from Mundo talked about possibility of signing either of Arsenal’s Nacho Monreal, Liverpool’s Alberto Moreno and Matteo Darmian of Manchester United.

In the coming weeks, we may be expected to see more reports on Barcelona’s search for a left-back in January and the list could include the above mentioned players.

Manager reveals he is ‘not aware’ of Everton rumours – Suggestion...