Last weekend, Mundo Deportivo reported that Ajax have turned down Tottenham Hotspur’s €50m bid for Frenkie de Jong, which was €20m more than what Barcelona had offered.

The front page of today’s edition of Sport claims the midfielder is a priority signing for Barcelona in the next summer transfer window. The Blaugrana have already marked the date that is ideal for them to complete the signing of the midfielder in 2019 as a move in January has been ruled out.

It’s claimed the Camp Nou outfit are so keen because Pep Segura, Eric Abidal, Ramon Plans, Ernesto Valverde and the rest of the scouts working for the club have been seduced by the idea of bringing the 21-year-old to the club, who is viewed as the player for the future.

Abidal replaced Robert Fernandez as the club’s technical secretary earlier in the summer and before the latter left his position, he stressed that Barcelona cannot  De Jong some other club. 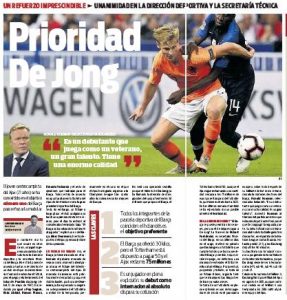 Sport now claims that approach from the Spanish champions in signing the Dutchman will not be simple because he is attracting interest from other clubs, particularly that of the north London club.