Ernesto Valverde is now left with Gerard Pique and Clement Lenglet as the only two recognised centre-backs at Barcelona following injuries to Samuel Umtiti and Thomas Vermaelen, while there is a lack of an experienced backup for Jordi Alba in the left-back position.

The front page of Catalan newspaper Sport claims the Blaugrana manager and technical secretary Eric Abidal want to strengthen the defence for the second half of the season by making new additions in January.

However, Sport say this prospect is not well accepted by the top leaders at Camp Nou and they are putting pressure on the 54-year-old to promote players from the academy into the first team.

If the young players fail to impress for the senior side, then they will be shown the exit door, but for a conclusion to be reached, Valverde must give them the opportunities.

It’s claimed the La Liga winners’ board appointed the former Athletic Bilbao coach in 2017 because of his track record of promoting academy players into the first team, something they believe he has not done at the club.

Barcelona spent €125m in the summer and the likes of Malcom and Arturo Vidal, along with Lenglet, have hardly featured this season and therefore, the board has refused to sign players in January and urged their manager to look at the academy.

Josep Maria Bartomeu, the president also admitted that is important to give opportunities to the younger players before looking elsewhere in the market.

“It Is bad luck that Umtiti and Vermaelen are out injured at the same time. Barcelona always has to be attentive to the market but we’re not in January yet. We’ll see what happens then. Now, however, it is an opportunity for the players in the academy,” he said. 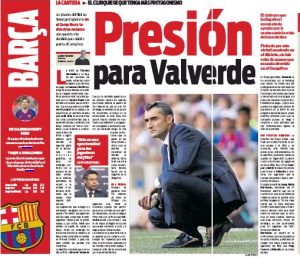 It should be seen how the situation develops over the course of the next few months as the difference between the board and the manager could have a direct impact on the performances on the pitch.