With the Court of Arbitration for Sport (CAS) overturning Manchester City’s Champions League ban, they will now work towards shaping up their squad for next season.

According to Catalan newspaper Sport, the Citizens had already planned for the future, expecting that they will be allowed to play in European competition next season. At least ‘that’s what they say from the club’.

It’s claimed the Manchester based side have a ‘clear list of gaps to fill’ to meet Pep Guardiola’s requirements, with four to five players for each position.

However, they still have to pay a penalty of €10m and this will be deducted from the budget.

If Manchester City manage to win the Champions League this term, €40m prize money can be included in the budget and an additional €5m can also be earned with FA Cup success. The potential sale of John Stones and Nicolás Otamendi could also bring in more funds.

Having lost Leroy Sané to Bayern Munich, Sport say City are planning to replace the German with a young talent. In addition to this, they are looking to bring in at least two central defenders as this is Guardiola’s ‘main object of desire’.

One would be a left centre-back, who can be a backup for Aymeric Laporte, and a right footed central defender. For the latter, Napoli’s Kalidou Koulibaly is ‘number one on the list’.

Barcelona are interested in Eric García and in the event he ends up leaving the club, City will bring in another player or either Stones or Otamendi would be retained. They also need to bring in a replacement for Claudio Bravo as his contract expires after this season.

According to Sport, Guardiola and Txiki Beguiristain are of the belief City can compete in all fronts, if they manage to strengthen the aforementioned positions. 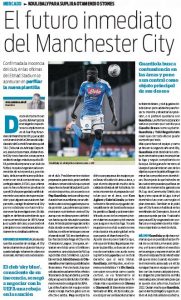 Rather than rebuilding the squad, the report adds the former Bayern manager’s plan is make necessary tweaks to help his side win the league again.

Should City manage to compete again with the help of new acquisitions and existing stars, the club would convince Guardiola to extend his contract.