Home Europe From Spain: Javi Gracia ‘one of the favourites’ for club following surprise...
SHARE

Watford have endured a disastrous start to the season and managed only two points from the first seven matches.

Javi Gracia was in charge for the first four matches and the Spaniard was shown the exit door earlier this month and replaced by Quique Sánchez Flores.

Over the weekend, the 49-year-old spoke to AS and explained he was surprised the Hornets decided to sack him just less than a month into the new campaign.

Even though it’s just three weeks that Gracia is without a job, he’s already been linked with a managerial role at Espanyol.

Catalan newspaper Sport reports Gracia has emerged as ‘one of the favourites’ to replace David Gallego after the latter’s side managed only one win in first seven league matches.

It’s claimed Espanyol will wait to see what will happen in the next two matches – CSKA Moscow and Mallorca – before taking a decision on Gallego. 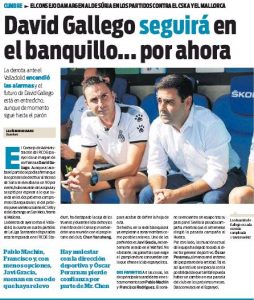 However, they are already looking at options and Gracia is one of the candidates, along with Pablo Machín and Francisco Rodríguez.

Sport states the only issue in appointing Gracia is his salary demands don’t coincide with what the La Liga side are planning to offer him.