Two days ago, we carried a report from TuttoMercatoWeb, who stated Atlético Madrid ‘think’ about Olivier Giroud.

Diego Simeone has seen his side score only 16 goals in 15 league matches. Their poor goalscoring form coupled with Diego Costa’s injury has made the Atlético manager prioritise bringing in a new striker in January. 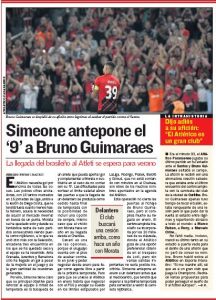 This could come as an advantage for Los Rojiblancos, should they turn their Giroud interest into something more concrete.

A move to Atlético would see Giroud play alongside, or compete with, his former Chelsea teammate Álvaro Morata, who is the only fit and recognised striker at the Spanish club.