There’s been multiple claims in the Portuguese press in recent days which have stated why Luis Diaz hasn’t signed for Tottenham Hotspur this month.

Spurs’ initial approach was rejected, yet it was thought the Premier League either came forward with a new offer, or showed their willingness to do so.

Whilst the player’s desire to move elsewhere has been important, it’s not the only reason Antonio Conte’s club have failed to bring the Colombian in.

Friday saw reports which stated Tottenham’s payment terms simply weren’t as good as those offered by Liverpool, and Saturday’s edition of Record explains the Reds are paying the whole fee over a period of less than two years. 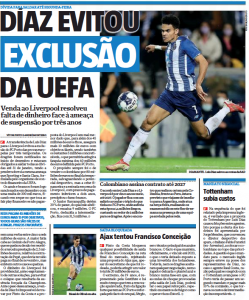 The agent is said to have presented the idea of signing Diaz to Fabio Paratici, however, Porto had already given the player’s agents, specifically Raul Costa, the mandate to sell him to an English side.

Therefore, the club would have been faced with paying two lots of 10% of the deal to different agents, taking 20% of the value away.

And that made it an impossible deal to do.