Sébastien Squillaci is known best in England for his time with Arsenal, which wasn’t a particularly happy one. Speaking to L’Equipe, the Frenchman was asked the most difficult period of his career and didn’t hesitate to say it was when he moved to English football.

Things could have been very different, with Squillaci having the opportunity to move to the Premier League earlier in his career. During the same interview he was asked to reveal a transfer that ‘almost happened’ and that’s when Liverpool came into the conversation.

At the time the former defender was on loan at Ajaccio from AS Monaco, and the chance of a move to Anfield appeared.

Quoted by the French newspaper, Squillaci explained: “It was when I was in Ajaccio, in my second year (2001-2002): I met Gérard Houllier in Paris to go to Liverpool. They were very interested. It didn’t happen because I returned to Monaco, who wanted to keep me.”

There’s a good chance that move would have worked out better than his later one, with him at a good period is his career. He returned to Monaco to win the Coup de la Ligue, 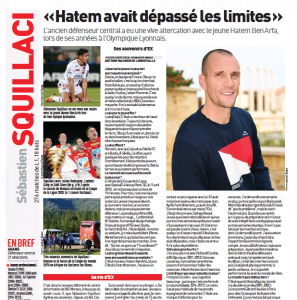 and then signed for Lyon where he won Ligue 1 twice and picked up a Coup de France medal, before signing for Sevilla and winning the Copa del Rey.

Monaco blocked the move to Liverpool and it would then take nearly a decade for Squillaci to finally get his switch to English football.