Maxime Lopez is one of the young stars of France’s Ligue 1 and a source of pride for his club Marseille. Despite suffering serious financial problems in recent years, now behind them due to new ownership, Marseille were able to keep hold of Lopez and that’s paying off.

The 19 year old attacking midfielder has 5 assists already this season and whilst he doesn’t always start and finish games, Lopez is an important part of the Marseille squad.

It could all be very different, and instead Lopez could find himself working with Jurgen Klopp at Liverpool. In a lengthy interview with L’Equipe, Lopez revealed a serious approach from Liverpool, although it isn’t clear when exactly that came.

Quizzed on serious interest from Anfield, Lopez was open about what happened: “Yes, they said to me: `In five years you get Coutinho’s place!

“They approached me in a good way. I even met Steven Gerrard at the stadium after a game. 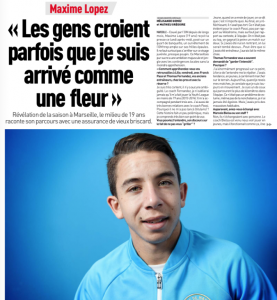 “I wanted to go there, but also to stay at OM. To go like that, at this age and even with your family, is very hard. I had noticed that they had thirty young professional players, not to mention the incumbents. You really have to be mentally prepared.”

If Liverpool wanted to make Lopez part of Klopp’s squad now then the asking price would be significant. Marseille aren’t under as much pressure to sell as they once were and the club is a much attractive place for footballers to be.

This looks to be a ship that has sailed, and won’t be docking in Liverpool.