Clément Grenier arrived at Guingamp in 2018 after spending 16 years at Lyon.

The midfielder spent seven years in Lyon’s academy before making his way into their first team in 2009.

During his time at the French club, Arsenal were interested in the 30-year-old and he even held talks with the Gunners.

Grenier revealed these details during an interview with L’Equipe.

In 2012, the France international came close to joining OGC Nice, but the move collapsed after Yoann Gourcuff suffered a knee injury in August of that year. The player admitted this and then mentioned the chat he had with the north London club.

“Yes, Yo [Yoann] gets hurt, I replaced him. I played freely because it might have been my last game with Lyon. After that, [Rémi] Garde told me: you stay,” Grenier said.

“It was perhaps the highlight of my career at Lyon, where I felt a coach who trusted me 100% and let me express myself freely.

“Later, when I was perhaps hesitant to go abroad, like to Arsenal or to other clubs, with whom I was in discussions, I stayed because his confidence was so enormous that I did not want to lose it. And thanks to him, I made my debut for the national team.

“Claude Puel and Bruno Genesio, when he coached the reserve, also allowed me to expand my game and learn to defend.”

The Frenchman is currently at Rennes and he doesn’t specifically mention when he held talks with the Premier League side.

Arsenal’s Alexandre Lacazette, like his compatriot, is also a product of Lyon’s academy and he joined the English club from the Ligue 1 side in 2017. 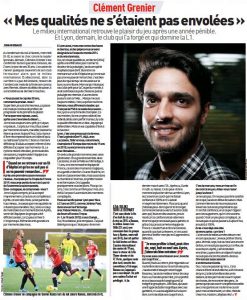 Grenier explained he has formed a special bond with the Gunners forward and a few others, who were with him at Lyon.

“We grew up together. With Lacazette, we arrived at the same age, at 11, we found ourselves in the French team, these are magical moments, we have maintained a strong bond. And with Maxime [Gonalons], we were in class together, but also in the room at the boarding school, in pre-training and in training. We call each other almost every day,” he explained.