Manchester City weren’t particularly bad against PSG on Tuesday evening, indeed they weren’t bad at all, but the French side were able to take advantage of crucial moments to win the match 2-0.

The result isn’t a disaster for Pep Guardiola’s men, and they’ll be hoping to get their Champions League campaign back on track in the upcoming fixtures, and surely looking forward to getting some revenge over Mauricio Pochettino’s side.

Across the match, it’s not too hard to argue that Manchester City were unfortunate, but one occasion they did see some luck was when Kevin De Bruyne picked up a yellow card, which would easily have been a red.

French newspaper L’Equipe, well known for their harsh player ratings, have given the City man just 3/10, the lowest mark of any player on the pitch. Rodri, Raheem Sterling and Jack Grealish were all given 4/10. 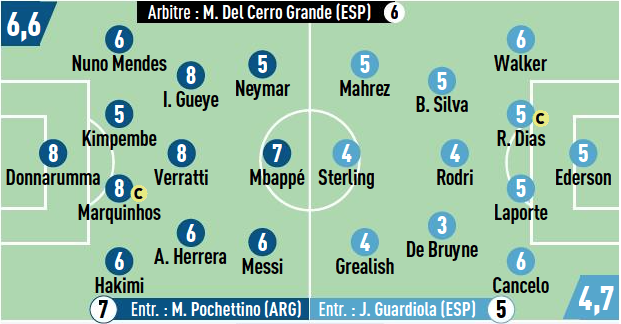 Usually, L’Equipe elaborate on their lowest ratings, but today they seem more content to simply celebrate PSG. On Guardiola’s side, they say the team lacks a striker and that the match saw them ‘penalised by a lack of efficiency’ in front of goal.