Home Premier League Arsenal Free agent has turned down both Arsenal and Newcastle this summer –...
SHARE

One of the big stories over the past few months in Italy has been the next destination of Paulo Dybala, set to leave Juventus on a free.

Multiples clubs in the Premier League, such as Arsenal and Newcastle United, have been linked with a move for the Argentine, who would represent a coup for any club who ends up signing him.

However, it appears neither the Gunners nor the Magpies will be the ones boasting about it, as per Gazzetta dello Sport’s report on Wednesday.

Making it clear that Inter appear to be the winners of the race after there were ‘refusals’ from the player to club such as Dortmund, Newcastle, Arsenal and Sevilla.

There is time for him to still change his mind, but with a meeting planned between Inter and the player’s representative on Wednesday, that’s highly unlikely, with Gazzetta saying ‘today could be the right day’. 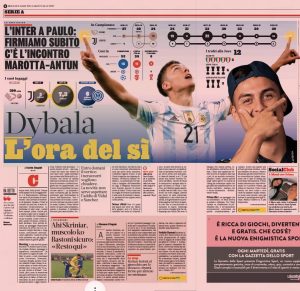 As for Arsenal and Newcastle, the fact they play in the Premier League might have had something to do with it, since Dybala never seemed keen on a move to England after previously rejecting the chance of playing for Manchester United.

Furthermore, neither Mikel Arteta nor Eddie Howe will be overseeing Champions League football next season; a competition Inter will be taking part in.