Valencia surprised everyone by sacking their manager Marcelino and replacing him with Albert Celades last week.

In his first match in charge as the Spanish club’s manager, Celades saw his new side suffer a 5-2 defeat against Barcelona.

The La Liga side will now make a trip to Stamford Bridge as they face Chelsea in the first group stage fixture of the Champions League on Tuesday.

After suffering a 4-0 defeat at the hands of Manchester United and losing the UEFA Super Cup to Liverpool, the Blues have bounced back and are unbeaten in their last four matches, scoring 11 goals in the process.

Frank Lampard was appointed as manager in the summer and due to Chelsea’s transfer ban, he was forced to rely on youngsters and academy graduates. Interestingly, all of their league goals have been scored by their academy graduates.

Despite the transfer ban and losing Eden Hazard to Real Madrid, Lampard has given his side a breath of fresh air and AS has hailed the former Derby County boss. 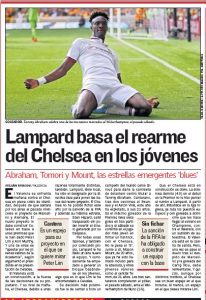 He has laid a foundation to the new project at Chelsea by relying on young players like Tammy Abraham, Mason Mount and Fikayo Tomori.

Valencia owner Peter Lim has entrusted Celades to use youngsters and the report suggests ‘Chelsea is good mirror to look at’ if the Spanish side want to reinvent themselves after a painful period.

Claim Burnley said to have offered €28m for target – Could...