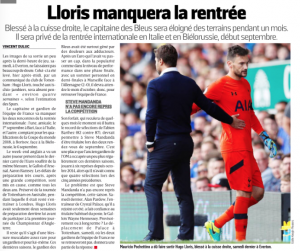 France have goalkeeper problems, but for completely opposite reasons. One of their very good goalkeepers has been playing too much, and the other one hasn’t been getting enough games.

Hugo Lloris is France captain and the country’s first choice goalkeeper, and he’s also injured. The Tottenham Hotspur player is out of the next round of international games, and L’Equipe believe it’s because of the pressures of football.

The French newspaper point out that across north London, Aaron Ramsey has suffered a similar injury. They say Lloris only had two weeks of preparation behind him before Tottenham’s first match, and so injury was more likely.

There’s no blame levelled toward Spurs, it’s just the way it is.

So in comes Steve Mandanda, but the problem with him is that he isn’t getting enough football.

Mandanda was a hero for Marseille last season, every week there seemed to be lengthy articles in the French press about just how good he was. Therefore it’s a disappointment in France that Wayne Hennessey is starting ahead of him at Crystal Palace.

That may just be temporary and similar happened with Lloris when he joined Spurs. If Mandanda isn’t first choice by the next international break, there’ll be journalists in the country asking him why.

If that’s situation and he plays well for France, then there may well be fury similar to that sent Tottenham’s way over their initial treatment of Lloris.