Tuesday’s edition of L’Equipe has an article on the future of Adrien Rabiot, and the midfielder’s reluctance to sign a new contract with PSG.

With a deal ending in June, the Ligue 1 club have been trying for many months to get the player to extend, but haven’t had the breakthrough they’ve been looking for.

Now, Rabiot is even more unsettled at his club, annoyed by Thomas Tuchel edging him out for big games. L’Equipe say the player is ‘upset by his situation’ and has ‘less and less chance’ of agreeing a renewal.

As it stands, the ‘trend’ is that Rabiot will leave the club in the summer on a free transfer. Talks have already been held with agents to see what kind of deal would be available for the 23 year old.

This is where Tottenham come into the story, again. 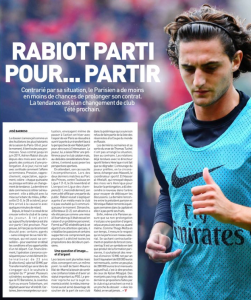 L’Equipe state Barcelona Juventus and Spurs have ‘expressed their keen interest’, and one or more of those clubs could even make an attempt during the January window.

If it comes down to salary, it’s unlikely Tottenham will be the destination.

L’Equipe say Rabiot has been looking for €10m per season, after tax, from PSG, close to the amount Kylian Mbappe earns.