This week’s edition of France Football has a big feature on Adrien Rabiot and everything going on around the PSG player over the past few months.

To the surprise of many, Didier Deschamps chose not to call Rabiot up for the final France World Cup squad. The midfielder was asked to go on a list of reserves but refused to do so, leading to mass outrage in France.

He’s likely to get abuse from crowds next season in Ligue 1, and those close to the player are said to believe a departure could be for the best. The player’s mother, who also acts as his representative, is said to have been working on a departure.

Barcelona and Juventus get mentions, with negatives and positives on both being genuine tracks, and then there’s Tottenham.

France Football claim Spurs have also ‘entered the race’ to sign Rabiot, with Mauricio Pochettino said to be keen on the midfielder if/when Mousa Dembele leaves the Premier League club. 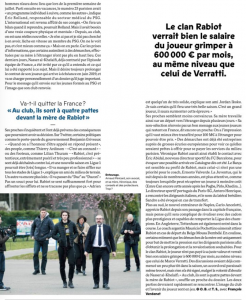 There’s a clear suggestion from France Football that this could all be an effort to pressure PSG into agreeing a big renewal, with Rabiot’s ‘clan’ said to believe he deserves €600k a month, the same level as Marco Verratti.

It’s that’s after tax, Tottenham may not be so keen to match it.