This week Southampton sacked Claude Puel after just under 12 months in the job. It’s been speculated the Frenchman was shown the door because his brand of football didn’t go down well with the St Mary’s faithful, but the French media believe some Southampton players also had their role to play in his departure.

French newspaper L’Equaipe believes some players turned against Puel, with Dusan Tadic as the ring leader. It’s been claimed Southampton’s leaders would have used this in order to get Puel out of the club, on top of the criticism he was receiving from fans. 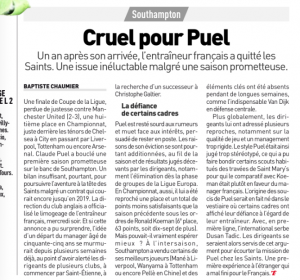 Southampton sold Sadio Mane to Liverpool and Victor Wanyama to Tottenham Hotspur during the last summer window, and it was always going hard to replace such players.

Tadic complained during the season that he wasn’t getting the prominence he deserved, so it’s not hard to believe he may have been part of a movement against Puel.