The Manchester United midfielder can finally see himself returning from injury, and helping Ole Gunnar Solskjaer’s side.

Pogba has been a huge miss for the Red Devils this season, rarely being available on a consistent basis for the manager. That loss was mitigated in the January transfer window, with the purchase of Bruno Fernandes from Sporting, and the Portugal international has hit the ground running.

Now there may be the possibility of seeing Bruno and Pogba on the same pitch soon.

L’Equipe say Pogba is expected to resume group training ‘early next week’. As far as matches go, it’s suggested he could return against Manchester City on March 8th, however, L’Equipe say Tottenham, a week later, is likelier.

Pogba is said to have recently told those close to him that he’s ready to return, and set himself the goal of the City game, even if he’d only appear from the bench. 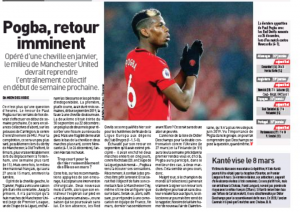 France play Ukraine and Finland at the end of March, and whilst it’s thought a long shot, L’Equipe suggest Pogba getting a couple of impressive games in could give him a chance of selection.