Over the past few years, we’ve covered Paris Saint-Germain’s interest in bringing Arsène Wenger to the French capital, going all the way back to when it was worth it.

However, that has now changed, with the veteran manager now anything but a desired man, but Le10 Sport in France claim the Ligue 1 leaders still have a role for him in mind.

The French magazine claim that, instead of giving him the team’s reins, Paris Saint-Germain have approached the Arsenal coach to be their ‘general manager’.

From what we gather, that’s different from the director of football role, which is Antero Henrique’s, and the 68-year-old would be brought in to help with the team’s politics. 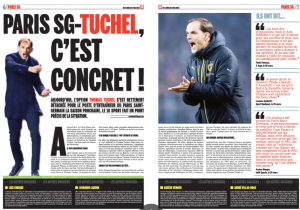 With a squad full of big egos, and Unai Emery struggling to manage them, this makes sense, and Wenger would help the next man in charge of the squad (Thomas Tuchel?) to deal with them.

After all, Wenger has managed some large personalities during his time at Arsenal, and he’s the kind of man most in France would respect instantly.

It’s not the worst idea in the world, but it’s not something he’s thinking about now, wanting to finish the season first before assessing what he might do in the future.