Olivier Giroud to Chelsea is a transfer that surprised everyone, yet it made so much sense when it was announced.

The player needed game time ahead of the World Cup, and the Blues were desperately after a target man, with even Peter Crouch mentioned as a potential answer to their problems.

However, according to France Football, three days before the deal happened, the then Arsenal forward wasn’t even thinking about moving to a new club.

The French magazine explain the 31-year-old was determined to get the 10-15 appearances Didier Deschamps asked of his potential players to be considered for the tournament, and he was planning on doing so at the Emirates.

Having turned down the chance to go to Everton again, and with loans to Dortmund and Sevilla not exactly up his street, his desire to stay in London was key. 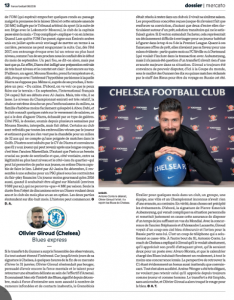 Then Chelsea came knocking, and two things happened that made him change his mind and transfer to Stamford Bridge.

First was the arrival of Pierre-Emerick Aubameyang, another obstacle (on top of Alexandre Lacazette) standing in his way of time on the pitch.

The second was Antonio Conte himself, with the Italian manager personally picking up the phone and telling Giroud he ‘absolutely’ wanted him, appreciated his target man profile and that he’d only have to fight with Alvaro Morata for a spot in his team.

Furthermore, Chelsea’s busy schedule during the second half of the season would grant him far more opportunities than a stay at the Emirates ever would have.

Then there was the prospect of Champions League football, but that was just a bonus in all of this.

France Football say that everything sped up after that, with Wenger ‘elegantly’ not standing his striker’s way, wanting the best for a man and a player he’s always appreciated.

It’s rare that transfers between two rivals go as smoothly, but when they do, it’s almost heart-warming.