It’s made clear by Thursday’s edition of L’Equipe that Islam Slimani wouldn’t have become a Newcastle United player yesterday if Monaco hadn’t backed away from a deal to sign him.

Monaco came close to signing the Leicester City owned player last week, explain the French newspaper, but their first loan offer was knocked back by the Foxes. The club returned with a second loan deal, but again saw the Premier League club reject their advances.

Slimani himself was interested in joining the French principality club, which is understandable given they fight at the top of the league and have a lot of sun, and are in a tax haven.

There are some things Newcastle would struggle to compete with.

After Leicester refusing the two approaches from Monaco, it’s claimed the Foxes then got in contact with ASM themselves, asking the club to rekindle their interest. 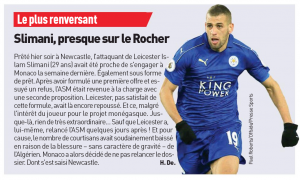 Leicester are said to have been left worried as other interested parties fell away, concerned about the player’s recent injury.

Monaco were no longer interested, and that’s fortunate for Newcastle, because managing to get Slimani on deadline day, after all the other failed striker attempts, is something of a rabbit out the hat.