Last summer, Mikel Arteta was seriously and repeatedly linked with taking the managerial role at Arsenal.

With Arsene Wenger leaving the club, Pep Guardiola’s assistant was identified as a possibility, and at one point he was favourite to be appointed by the Gunners. However, he wasn’t keen on leaving Manchester City at that stage so continued working with the Premier League champions.

With another year of experience under his belt, the Spaniard may think differently if he’s approached by a club this summer.

Thursday’s edition of L’Equipe explains that Lyon are looking at him, although he’s not the favourite right now. Arteta is being ‘studied’ as an option for the French club.

He has an advantage in that he knows the French league from his spell with PSG, but that he hasn’t played for Lyon previously is seen as a negative. 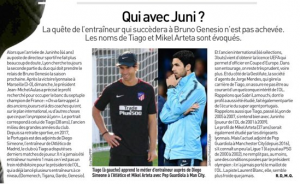 The club’s president, Jean-Michel Aulas, is aiming to get former players in for more than one role, so maybe another year at Manchester City lies ahead.

Diego Simeone’s assistant Tiago, formerly of Chelsea and Lyon, is also being considered.