Christophe Herelle is a French defender who plays for Troyes AC and, if he doesn’t move, will be in Ligue 2 next season.

The centre-back started 34 games in Ligue 1 last season, but was unable to help his side avoid relegation as they finished 19th in the table.

The 25-year-old still went on to attract interest from France, Belgium and England. Today’s edition of L’Equipe claims Nice, Club Brugge, Anderlecht and Huddersfield Town are all tracking the centre-back.

Troyes are willing to do business, especially after dropping to the second tier of the French league. Nice appointed Patrick Vieira as their new manager and the former Arsenal and Inter Milan midfielder has a few priorities when it comes to retaining a few of his current players. 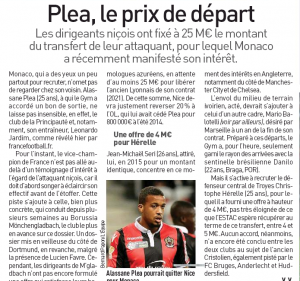 However, that hasn’t stopped Nice from making an approach for Herelle. They have already made a €4m bid for the central defender, which is very close to Troyes’ valuation. The relegated Ligue 1 club are demanding a fee around €4-5m to part ways with the Frenchman.

There’s no claim of any offer from Huddersfield yet.

Nice and Troyes have not reached an agreement for Herelle and will face competition from David Wagner’s side, Club Brugge and Anderlecht in signing the defender.

‘Without luck’ – Barcelona failed to sign Manchester City star on...