Papy Djilobodji and Sunderland isn’t going to quietly go away.

The English club terminated the defender’s contract this week, leaving him missing the wages he’d have been due on the deal which ran to June 2020.

Without a club, and without a salary, the former Chelsea player isn’t going to take the action without a reply, and that had already been made clear in the French media.

In their Thursday edition, L’Equipe states Djilobodji ‘disputes’ Sunderland’s version of events and is ready for a legal fight. The French newspaper says the 29 year old will ‘seek arbitration’ from English courts ‘before turning if necessary to a civil court’.

At the weekend, L’Equipe published a story on Djilobodji’s Sunderland situation, ahead of the expected club action.

It was claimed: ‘The defender has a written agreement authorising him not to train in July in order to finalise his transfer. Without news from his leaders, he stayed in Nantes to train physically in August and he did not receive his salary, while waiting for a new destination.’ 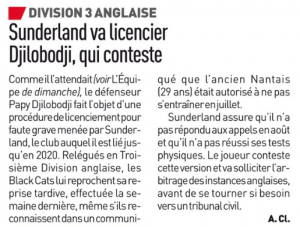 This one is likely to get messier, especially if more comes out when things are taken to court.

There’s been failings on all sides and Sunderland and Djilobodji, or at least those who represent the player, hold blame for letting things get to this stage, having had many months to get him out of the club and pushed elsewhere.