Home Europe From France: Ancelotti ‘ready to spend’ to get signing, desperate for player...
SHARE

If you followed the Everton transfer rumour mill last summer/autumn, you’ll be aware that Adrien Rabiot was one of the names being reportedly considered by Carlo Ancelotti to bolster the midfield.

In the end, the likes of Allan and Abdoulaye Doucouré arrived in his stead, but the former Paris Saint-Germain man remains on his ex-manager’s radar.

Working together in the French capital when the Italian was in charge of the Ligue 1 champions, Rabiot and Ancelotti could be reunited in the summer, according to France Football.

One of the few, if not the only manager to get the best out of the midfielder, the Everton boss ‘would be ready to spend more than €30m to acquire the services of the Juventus French midfielder’. 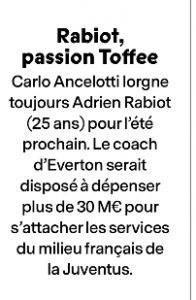 That’s a considerable amount of money, but Rabiot’s contract in Italy does run down in 2023, and it’s interesting to see this coming a day after Stadio Sport in Italy claimed the Serie A champions were currently considering ‘an offer received from Everton’ for a summer transfer.

In fact, it was also said the Toffees were ‘ready to do anything’ to please Ancelotti, which would include matching the €30m on demand for the midfielder.

Either way, that’s now two sources reporting it independently, and we’ll be keeping an eye out for more.