Obbi Oulare spent last season on loan at Antwerp, his third loan move since signing for Watford in 2015.

Previously, the striker has been at Zulte Waregem, also in Belgium, and Dutch club Willem II.

The 22 year old has managed to pick up some fans along the way in Belgium and Gazet van Antwerpen report Satndard Liege are interested in the player.

As Belgian clubs get set to resume preseason training, Oulare has a hip injury so there’s no huge rush.

It’s claimed by the Belgian newspaper that Standard Liege have a four year contract waiting for the Watford player, but there doesn’t appear to be an agreement between the clubs and Oulare hasn’t heard anything. 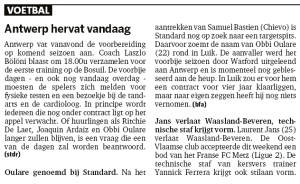 This was also claimed over the weekend by another Belgian newspaper, Het Nieuwsblad.

Gazet van Antwerpen don’t share a possible price for the move, but Watford are obviously going to want a reasonable fee given Oulare has a contract with the club until 2021.