Turning down the chance to move to Chelsea during the 2018 January transfer window when Antonio Conte was still in charge, Edin Dzeko could return to the Premier League in the summer.

A number of articles over the past few months have suggested this, and their refusal to go away point towards there being some fire behind the smoke, as Corriere dello Sport continue to push the story on Tuesday.

The 33-year-old’s contract is due to expire on June 30th 2020, meaning this summer will be Roma’s last chance to sell him to interested clubs, reported to be West Ham, Everton and Inter.

Corriere’s story on Tuesday focuses the most on the Hammers, likely helped by the fact Manuel Pellegrini is a huge fan of the Bosnia international, having managed him at Manchester City all those years ago. 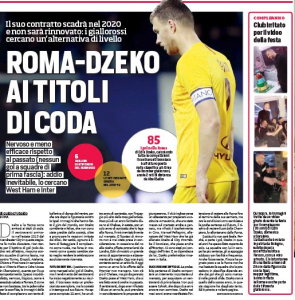 With Roma looking likely to miss out on Champions League football next season, this could be Dzeko’s last chance at getting a big contract in a competitive league, one he already knows well.

Corriere state the veteran striker ‘could take into consideration’ the offers he is expected to receive in the summer, and he’s also of interest to Everton, although the details on that side of things are sparse.

It seems everyone is pushing him towards London Stadium, and it does make the most sense with Marko Arnautovic likely leaving come season’s end.