Lucas Perez hasn’t exactly had the start he was dreaming of at Deportivo La Coruna.

Such were the club’s efforts to sign the player from Arsenal over the summer, and the near desperation of Perez and his agent, that expectations were always going to be over the top.

A solitary goal so far and picking up an injury isn’t exactly what was had in mind.

Given the return to Spain is initially on loan, what happens is very much of interest to Arsenal, as it could impact any future fee received for the player. A poor season at Depor, the club of Perez’s heart, and it’s not going to be easy for Arsenal to find a club to pay big bucks.

Mundo Deportivo say Lucas Perez has suffered ‘significant contusion in the left quadricep, which has caused a hematoma in the crural muscle’. 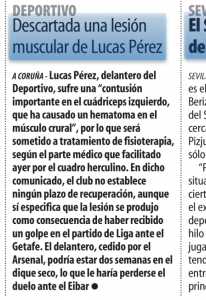 It sounds complicated, but basically he’s got a very bad bruise on his left leg.

There’s no recovery period yet, but it’s likely to be weeks rather than anything more long term. It’s still news Arsenal won’t be thrilled to hear.

The best outcome for Arsene Wenger and co is for Perez to get fit soon, and hit the back of the net so often he’s a possibility for Spain’s World Cup squad.