Around mid-December, a story emerged that Brighton and Watford were both interested in Youssef Msakni, currently contracted to Al Duhail in Qatar.

The 28-year-old, who missed out on a World Cup with Tunisia due to a knee ligament injury prior to the tournament, was reportedly close to signing for the Seagulls, with claims of him travelling to England to undergo a medical.

All this, however, was false, as the player revealed to Sport/Foot Magazine in Belgium, explaining the Premier League club that came forward was Cardiff.

In the middle of a relegation battle, the Bluebirds did their best to improve their attack over January, approaching the winger in the process, who ultimately turned them down, ending up at Eupen on loan instead.

Why? Let him explain. 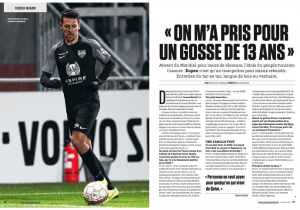 He said when asked about Brighton: “No, no, that’s nonsense. You know why they said that? Because I went to London for three days with my wife. I posted a few snaps and they said I was undergoing a medical in Brighton…

“Cardiff’s offer was good, but I thought about it. Even if it’s the league I want to play in, I still hadn’t played [since returning from injury] and the rhythm over there is insane… It was impossible. Therefore I accepted to come [to Eupen].”

Knowing he would play far more in Belgium than he would at Cardiff, Msakni was also aware Eupen only played once a week, meaning he would have more time to recover between games and reduce any possibility of injuring himself once again.

A smart move, and one he hopes will pay off, as a good five months under Claude Makélélé could get him the transfer he wants down the line.

Maybe if Cardiff come back in the summer, he won’t say no a second time.