One of the big stories of the January window for some of the clubs in the bottom half of the table was the future of Karl Toko-Ekambi.

Among them were Brighton, who seem determined to buy the Angers star, having bid for him both in the summer and a couple of months ago.

The player revealed in November he turned down the chance to join Chris Hughton’s side ahead of the current campaign, deciding to ’300%’ stay with the Ligue 1 side who gave him the opportunity to play in France’s top tier.

Then, just ahead of the January window, Toko-Ekambi explained he wasn’t planning on moving midway through the season, but that didn’t stop Brighton & Hove Albion to give it a go early on, said to have bid €14m for the 25-year-old. 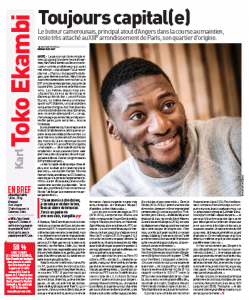 And, according to L’Equipe over the weekend, it wasn’t Angers who rejected that offer, but the striker himself.

He told the newspaper on Saturday: “We are currently on a mission, and we are going to try and finish it”.

Said mission is to stay up in Ligue 1, as Angers currently lie 14th in the table, just three points above the relegation zone with 10 games to go.

If you want to understand how important Karl Toko-Ekambi has been to them this season, the Cameroon international has been involved in 56% of their league goals.

Will Brighton be among those interested? If past transfer windows are an indicator, then yes, they will be.

First, however, they’ll have to stay up themselves.