Last week, Mercato365 broke the news that Swansea were interested in Toulouse’s Ola Toivonen to bolster their front line.

The Sweden international only has one year left on his contract with the Ligue 1 side, and could be interested in a return to England, having previously played for Sunderland on loan from Rennes.

In fact, an exit before the end of the month is likely, as La Dépêche report on Tuesday the 32-year-old has missed training sessions in the south of France in order to force a move.

Graham Potter’s side want to loan Toivonen for the season, but considering his contractual situation, doing so would mean having to convince Toulouse to let him go on a free at the end of the campaign. 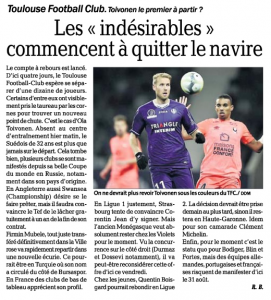 There is said to be interest from other clubs, especially in Sweden, but it remains to be seen whether they’d be willing to pay up front for his services, or if they follow in the Swans’ footsteps with a loan offer.

Realistically, it all comes down to how badly Toulouse want to get Toivonen off their wage bill.