We recently covered initial reports from Turkey that the Ghana international is a transfer target for Trabzonspor, as they look to improve their squad in January.

Fanatik claim Ekuban, who’s an international teammate of Daniel Amartey, will try to convince his friend over a move to Turkey.

The 24 year old has yet to feature for Leicester City this season and could look for a new club in January to get more first team football.

Ekuban himself has managed to kickstart his career since initially going out on loan to the Trabzon club from Leeds United. The Super Lig side made his move permanent in the summer. 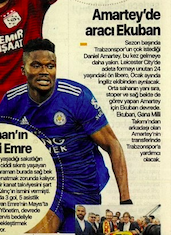 Along with Amartey, Trabzonspor have been linked with a move for Stoke City midfielder Badou Ndiaye in recent weeks.

Amartey’s contract with Leicester City will expire at the end of June 2022.