If you’ve been following us over the past year or so, you know that if there’s one story we covered from top to bottom and more, it was Simone Zaza’s stay at West Ham.

Brought in by Slaven Bilic on loan alongside Jonathan Calleri to try and improve the Hammers’ frontline, the Italian striker never managed to impact a game at the London Stadium, eventually seeing his stay cut short and ending up at Valencia a bit later.

Finding his shooting boots in Spain, the 25-year-old striker has scored four goals in 14 La Liga appearances, which is four more than he managed at West Ham over 11 matches.

Following his brace against Granada at the weekend, it was announced that his stay at the Mestalla stadium would now be permanent, keeping him there until 2021. 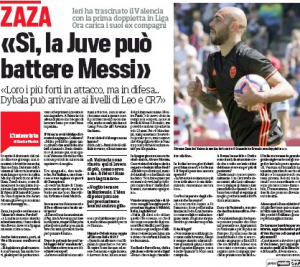 Corriere dello Sport went to Spain to talk to the player following the news, where they asked Zaza about the differences between his two loan spells this season, and the Italian striker appeared to partly blame West Ham’s training for his failures.

As well as admitting he never managed to adjust to England, he said: “In England, training is intense, but very sure. Others managed to express themselves, but I never got off to a good start. In Valencia, we train more, and I need to work hard to be comfortable in a game”.