Looking back at what’s happened since the January transfer window, Hull’s tactic of throwing money at anyone willing to join them appears to have worked.

Marco Silva has taken the club from rock bottom of the Premier League to three points above the relegation zone while having to deal with many new signings acclimatising themselves to a new team and new country. 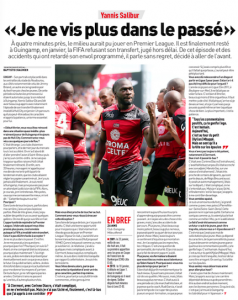 There is one player, however, who never quite made it, with his transfer getting cancelled four minutes before the deadline: Guingamp’s Yannis Salibur.

The 26-year-old saw a dream move to the Premier League declined, but that hasn’t stopped him, looking forward instead of living in the past, as he explained in an interview with L’Equipe on Tuesday.

He said: “It was weird. The clubs were in talks, and the last day of the window, everything sped up. They first told me to get on a plane, then told me not to. I’m not sure why Hull pulled out. Then, around 8pm, my agent told me to be ready to leave the next day.

“The teams were going to sort the paperwork out before midnight. I never left in the end. I stayed at Guingamp, but I couldn’t play while waiting for FIFA’s decision. Therefore I ran, I trained. My friends, those who know me, told me: ‘It’s always to you this happens’.”

Explaining he’s had a few unlucky moments in his career, the forward is now focusing on what’s left of the season, and if a new transfer to Hull, or the Premier League in general, presents itself, then that will be his destiny.

In his words: “I’ve got to give what I have now my all to give the chance of getting there. Some trains come by just once, others more than once.”

The left-winger has enjoyed a positive season with Guingamp, scoring six goals and picking up five assists in 32 appearances in all competitions.