One of the revelations of this World Cup, Russia’s Aleksandr Golovin has managed to inspire a whole country with his performances against Saudi Arabia and Egypt, helping his national team qualify for the first knockout round.

Already linked with a move to both Manchester United and Juventus prior to the competition, the 22-year-old has seen his stock rise drastically in recent weeks, attracting alleged interest from other teams, like Chelsea and Arsenal.

The Serie A champions appeared to be favourites to acquire his services for a while, but those talks appear to have calmed down a bit as their focus shifted to wrapping up Joao Cancelo’s arrival from Valencia. 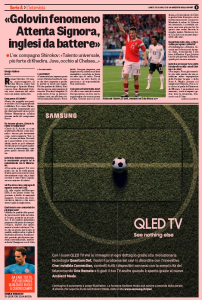 He said: “I know there’s been contact between the player and Juventus, but we’ll have to see what CSKA think of it. There’s no deadline for Golovin, and the CSKA president knows how to manage the market, both for arrivals and departures.

“With this World Cup, Golovin’s value is increasing, and there could be a real auction for him. In this case, I see the English teams as favourites, especially Chelsea”.

Despite this, Shirokov admitted he wasn’t sure if the young midfielder was ready to make the leap to a club like the Blues in the Premier League, suggesting it might be better for him to go to a transition league like Ligue 1.

Either way, whether Chelsea, Juventus or AS Monaco get Golovin this summer, they’ll first have to deal with CSKA Moscow, which none appear to have done as of yet.