It’s Champions League week, which means Gazzetta dello Sport have got their previews out early ahead of Inter vs Tottenham.

As tends to be the case, they try and find someone who has played for both teams (when possible), which, in this case, was Carlo Cudicini, currently a coach at Chelsea under Maurizio Sarri, originally arriving with Antonio Conte.

Playing for Tottenham between 2009-2012, around the same time as Heurelho Gomes, prior to Michel Vorm’s arrival, the now 45-year-old was asked if he could provide some insight regarding Mauricio Pochettino’s side and if this one compared to the one he was a part of.

He said: “Impossible, and not only because the squad has changed entirely. Back in my day, Spurs were a club searching for a dimension. Today, they’re in the Champions League permanently, have many young players who are of a high level, and the club has widened its horizons, like the decision to restructure White Hart Lane.” 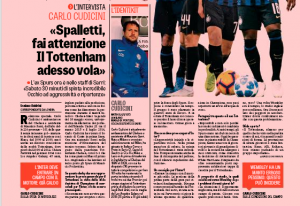 Tottenham’s new stadium remains a controversial topic of conversation within the Spurs fanbase, as the opening keeps getting postponed on a regular basis.

This leaves the club needing to rely on Wembley to play their home games, which has caused its own issues, especially following the NFL games.

Asked about the pitch, Cudicini said: “It’s improved a bit, but the end remains a potato field. Playing on that pitch isn’t easy. Weird, right? Wembley used to be a temple, the English stadium par excellence. Now it’s one of the absolute worst. Inter will also have to deal with this problem.”

Pochettino’s men seemed to fare quite well over the weekend, as they became the first team to beat Maurizio Sarri’s, and Cudicini’s, Chelsea in the league, winning 3-1 thanks to goals from Dele Alli, Harry Kane and Heung-min Son.