Currently third in their group after three games, Napoli could really do with winning the next three in order to qualify for the knockout stages.

Unfortunately for them, the first obstacle in reaching that goal happens to be a game against Pep Guardiola’s Manchester City, even if it is at home.

Losing 2-1 at the Etihad, Maurizio Sarri’s men will need to bring they A-game to see off the Premier League side, who are yet to lose a game in the league, winning nine of their first 10 matches.

One man, however, who thinks they can get something out of Wednesday’s game is Paolo Di Canio, as the former Sunderland manager gave an interview to Il Mattino on Tuesday about the fixture, and was even kind enough to pinpoint two weaknesses Napoli should target.

He said: “It’s true that the Champions League requires a different attention, but the individuality that can make the difference when things are going well can also hinder you when it doesn’t have a great deal of experience. 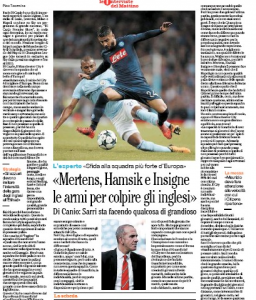 “Stones is young, and getting a lot better, but he still has his flaws. Walker isn’t very good defensively because he’s instinctive.”

Bought for a combined £90m+, the pair are still finding their feet at the Etihad.

While Walker is 27, he only just arrived at Manchester City, signing from Tottenham in the summer, and has just 14 appearances in a whole new system.

As for Stones, while better versed at playing under Guardiola, he is still only 23, and experience will come from time and learning from his mistakes.

With Lorenzo Insigne, Dries Mertens and José Callejon running at you, there will be little room for error on Wednesday night.

Then again, they already know that, and it worked out quite well last time.

It’ll be interesting to see if it’s any different away from home.