Paul Pogba’s desire to leave Manchester United in the summer transfer window has not been fulfilled and the midfielder will have to stay at Old Trafford, at least until the end of this year.

The France international publicly admitted that he wants a new challenge before the start of the season and his agent Mino Raiola also stressed he wants to take his client elsewhere.

Ole Gunnar Solskjaer’s side failed to qualify for the Champions League and have managed just one win in the first four matches this season.

Former Red Devils striker Louis Saha has given interview to Spanish newspaper AS and explained the Premier League side will struggle to sign the players they want without taking part in the Europe’s elite club competition.

Saha also spoke about the possibility of losing Pogba due to a lack of Champions League football.

He said: “I understand perfectly well that his dream is to be on a team where he can play and win the Champions League, in the end it’s about raising titles and taking advantage of opportunities.

“We only have one professional career. There are cases where your heart beats for the club you play in and others where you can go where you have the chance to win something, and in very rare cases both are combined.”

Real Madrid have long been chasing the France international and Los Blancos president Florentino Pérez admitted his side failed to sign Pogba due to Manchester United’s reluctance to sell. 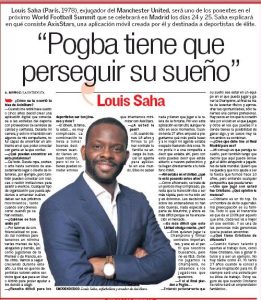 When Saha was asked if he thinks Pogba should join Real Madrid, he explained: “My advice is to pursue your dream, but I also have to tell you that here [at United] you can achieve success by attracting world-class players.

“I want him to stay and help us [United] be the force we were 10 years ago, but I understand any perspective he may have.”