When the Premier League season started, we were just happy that the transfer window was over so José Mourinho and Ed Woodward would finish the media war between them.

With the Portuguese boss wanting more signings at Manchester United, it was good to see him stop moaning a little bit and focus on the games the team had to play.

But it seems it’s not only Mourinho who thinks that the Red Devils’ board should have spent more in the transfer market in order to make a competitive squad for the season.

Portuguese newspaper O Jogo has today an interview with José Morais, who’s currently the manager of Ukranian side Karpaty, and worked with José Mourinho at Chelsea as an assistant coach. 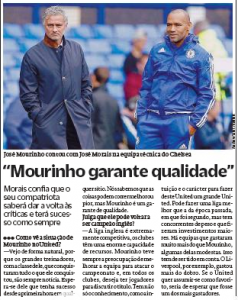 Morais was first asked by O Jogo about how he sees Mourinho’s situation at United, and replied: “I see it naturally, because the great managers, with his class, who have conquered everything he has conquered, are always news. He is expected to succeed from the first hour anywhere. We know things can go better or worse, but Mourinho is a guarantee of quality.”

Then asked if Mourinho can be champion again, Morais blamed the club’s transfer window: “The English league is extremely competitive, the clubs have an enormous capacity of resources. Mourinho has always had the concern of improving the team to attack the league and, in every club, wants to have players to compete for the title.”

“He has not only the knowledge, but also the intuition and character to make this United a great United. He can make a better league than last season, in which he was second, but has strong competitors who have made bigger investments. There are teams that have spent much more than Mourinho, some of them modest. This has to be taken into account. Liverpool, for example, spent more than double. If United want to take on the role of favourite, you’d expect them to be one of the biggest spenders.”

Jose Mourinho, preparing Manchester United to afec Watford on Saturday, will be glad of the backing from his former assistant.